COVID-19 - Support for our author and subscriber community ( Free Publication ) 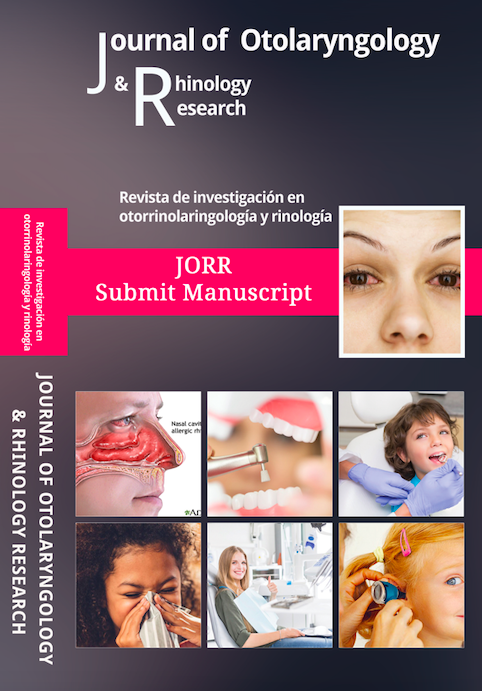 Current Issue
Vol 3 No 3 2022:
Journal of Otolaryngology and Rhinology Research

MPR invites original research and review articles not published/submitted for publications anywhere. The journal accepts review articles only if author (s) has included his/her own research work and is an authority in the particular field. Invited or submitted review articles on current medical research developments will also be included. Medical practitioners are encouraged to contribute inter
Read More

About the Problem of Cancer Causations

About the Problem of Cancer Causations

Beside the gen hypothesis for the explanation of cancer there exists the metabolic hypothesis of Otto Warburg. It is explained with the result that the probability of its correctness is high. An effectful treatment can be concluded.

Incipient acute phase in compartment syndrome of the lower limb, behavior and discussion

Incipient acute phase in compartment syndrome of the lower limb, behavior and discussion

Introduction. Compartment syndrome is described as a pathological entity that owes its origin to several causes, where all of them lead to an increase in internal pressure of an injured limb that has muscle groups divided by septa and facial that are less compliant than by increasing pressure due to above 30 mmHg leads to deep nerve and vessel compression. Presentation of the patient. We present a case of incipient acute compartment syndrome of the lower limb in a patient who ruptured the gastrocnemius muscles at the knee after practicing sports. With the aim of testing the validity of preventive follow-up and conservative treatment through a protocol in four stages, lasting one week, it was possible to verify that as the treatment progressed in stages, the symptoms and signs disappeared until a total solution was reached. .after completion of the treatment, surgical intervention not being necessary in said patient. Conclusions. Acute compartment syndrome in the incipient phase can be resolved with conservative treatment, avoiding surgical intervention, provided that an adequate treatment protocol is applied.

Need for Artificial Intelligence in Pharmaceutical Industry and its limitations

Need for Artificial Intelligence in Pharmaceutical Industry and its limitations

Introduction. AI is often being touted as the means to bring about the fourth Industrial Revolution and its role in almost all sectors of our society is almost certain. This brings about an urgent need for evaluating benefits and limitations of AI and Machine Learning across various sectors. Pharmaceutical industry has pioneered in embracing the use of AI in all of its core areas but the success as of yet seems very limited. The major advantage of AI is that it reduces the time that is needed for drug development and, in turn, it reduces the costs that are associated with drug development, enhances the returns on investment and may even cause a decrease in cost for the end user along with improved drug safety. So in this article we will review the scope and limitations of AI in the Pharmaceutical industry.

Surgery is a very stressful situation for humans, resulting in various psychiatric problems. Fear of the operation process, fear of the unknown, death anxiety along with changes in primary personal, family and professional roles, cause the manifestation of problems from the mental realm. The effects of psychiatric disorders can have a profound effect on both the mental and physical health of the patient. Aim: The aim of this study is to present psychiatric disorders during the perioperative period. Material and method: The method used to write this study is the literature review. The writing was done by studying books, scientific articles and internet search. Results: Psychiatric problems such as anxiety, depression, delirium at their onset, affect the preoperative and postoperative condition of the patient. Conclusions: The evaluation of psychiatric disorders experienced by patients should be an integral part of perioperative care. Early diagnosis and early treatment are associated with the avoidance of chronicity and serious complications.

A comparative study of HIV sero-prevalence between nulliparous and parous women of reproductive age who attended the Sinawe Center, Mthatha, South Africa.

A comparative study of HIV sero-prevalence between nulliparous and parous women of reproductive age who attended the Sinawe Center, Mthatha, South Africa.

To compare the sero-prevalence of HIV infection between nulliparous and parous women who attended the Sinawe Center following sexual abuse.  Methods: A record review of victims of sexual abuse who reported to the Sinawe Center, Mthatha General Hospital.  Results: Six hundred and eighty-five females attended the center between 1 January and 31 December 2005. Two hundred and seventy-eight were 16 years or older. Of these, 268 had testing for HIV done and 72 (26.8%) were found to be positive. The highest number of positive results, 30 (11.2%), was found in women between 21 and 25 years.  There were 160 (59.7%) nulliparous women, of whom 30 (11.1%) were HIV positive, and 108 (40.3%) parous women of whom 42 (15.7%) were HIV positive. Among the nulliparae the highest positivity, 17 (6.3%), was in the 16–to-20-year age group, while in the parous women it was in the 21-to-25-year age group: 26 (9.7%). Twenty-nine (10.8%) rapists used condoms during the sexual act. Condoms were used by the perpetrators when raping 15 (50%) victims who were HIV positive.  Conclusion:  There was a higher prevalence of HIV among parous women than among nulliparae who attended the Sinawe Center.